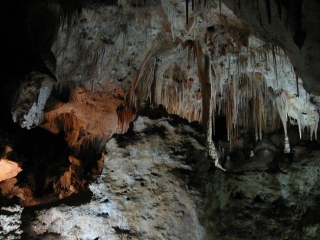 Don’t take a flash picture here, that’s all I can say – at least when the bats are flying. It apparently blinds them, and makes them fly into things and die. And they are protected. So take a flash photo of them at the ranger talk when they are flying out of the cave, and you will be removed by an armed ranger. At least that’s what happened when we were there. The caverns are really great to visit. One thing I really like here is that they have self-guided tours. Sometimes the places that have ranger only tours are harder to visit because you need reservations and you need to time everything out perfectly (hard to do sometimes with kids in tow). Also, our kids have a habit of becoming bored on ranger guided tours because, well, there’s all that TALKING. So they respond by screaming to hear their echo. Not great when you are in a cave. They have ranger guided tours here too, and you can’t see many of the areas without going on one.